Bourla donates his $1 million Genesis Prize award towards the construction of the Holocaust Museum of Greece in Thessaloniki, to commemorate Greek-Jewish communities wiped out by the Nazis 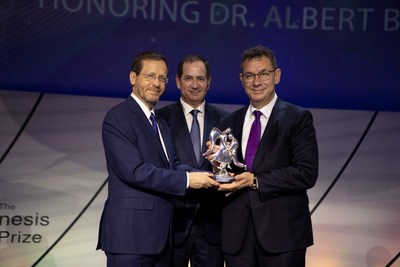 The gala event brought together hundreds of dignitaries from Israel, including government ministers, heads of business and philanthropic organizations, as well as prominent representatives of the Jewish Diaspora and leading members of the global medical community.

The annual $1 million Genesis Prize, dubbed the "Jewish Nobel" by TIME magazine, honors extraordinary individuals for their outstanding professional achievement, contribution to humanity, commitment to Jewish values and the State of Israel.

Dr. Albert Bourla was announced as the 9th Genesis Prize Laureate in January 2022. The award recognizes his leadership in delivering a vaccine against COVID-19, which saved millions of lives during the pandemic. The Genesis Prize also celebrates the boldness of his vision and willingness to assume risks, which enabled delivery of the vaccine in record time.

In addition to honoring the vast humanitarian impact of Dr. Bourla's leadership, the award also celebrates his pride in his Jewish identity and heritage, and his strong support for the State of Israel.

The President of Israel Isaac Herzog said: "Albert Bourla was not deterred by high stakes, by naysayers, by conspiracy or by politics. He believed in the vaccine, and invested every ounce of himself in realizing what seemed at the time a far-fetched fantasy. The vaccine was developed in record speed, utilizing the technology of tomorrow to successfully hold back a devastating pandemic. A study published by The Lancet just days ago, points to nearly 20 million lives saved by COVID vaccines. Indeed, the vaccine gave us freedom we thought we lost. Albert, I congratulate you and your colleagues and counterparts, who are making such a critical impact on humanity, while embracing your Jewish heritage and values, and inspiring Jewish pride." Founder and Chairman of The Genesis Prize Foundation Stan Polovets added: "To save a human life is a fundamental Jewish value. Today we honor Dr. Bourla ? a living embodiment of this ancient Jewish principle. We also celebrate the immense contribution of Jewish doctors who were on the frontline of the COVID pandemic for two years and who continue to save lives of people suffering in Ukraine today."

The ceremony opened with a moving tribute to the people of Ukraine and appreciation to the many Israeli and international Jewish organizations who are providing humanitarian aid. The Genesis Prize Foundation premiered a video "Jews in Medicine", exploring the roots and impact of Jews on the medical field from biblical times to the modern-day fight against the COVID pandemic (LINK TO VIDEO; for more details, please see section Jewish Contribution to Medicine).

2022 Genesis Prize Laureate Dr. Albert Bourla said: "I am honored and deeply humbled to receive the Genesis Prize. Honored because I never set out to be famous, and I never imagined that I would one day be up here with the illustrious nominees and past awardees?artists, philanthropists, and statesmen and stateswomen who show the world the best that the Jewish people have to offer. And humbled because this is not my award?it belongs to all Pfizer colleagues who worked tirelessly in the middle of a global pandemic to make the 'impossible possible' and give the world a chance to return to normalcy. Every life is precious and we must confront our challenges with courage, humility and perseverance. My Pfizer colleagues lived these values, and I am proud to be here in Israel to celebrate them and their extraordinary achievement."

Following the tradition established by the inaugural Genesis Prize Laureate Michael Bloomberg, Dr. Bourla announced that he will forgo the $1 million prize award and has asked the Foundation to donate the funds toward establishing the Holocaust Museum of Greece to be built in Thessaloniki.

Albert Bourla was born in Thessaloniki, home to an ancient Jewish community that traced its roots to antiquity. The vibrant Jewish community of 55,000 was almost completely wiped out during the Nazi occupation. Dr. Bourla's young parents narrowly escaped death and were among only 2,000 survivors. The Greek Holocaust Museum will immortalize the history of the Greek Jewish community from antiquity to modern age.