Mayor R. Rex Parris shared the lessons learned from the City's effort to achieve net-zero in 2019 and to become the first hydrogen city in the U.S. 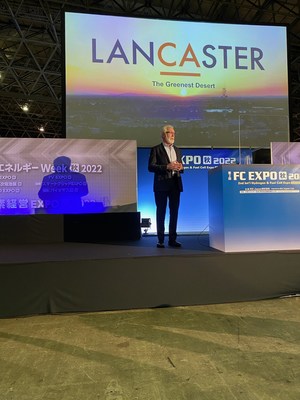 "Since my first term as mayor in 2008, I have prioritized improving the environmental and economic conditions for the citizens of Lancaster. We started by searching for solutions that could help leverage locally available resources and seeking out partners that could help us make the most of those solutions in our City," Parris said during his keynote speech.

Over the course of Parris' five terms as mayor, he has transformed Lancaster into a renewable energy leader by attracting more than $2 billion of investment in green companies and technologies. The City of Lancaster's business investors include BYD, which manufactures electric buses; Heliogen, which generates hydrogen from concentrated solar energy; SGH2, which gasifies wastepaper into hydrogen; and Hitachi Zosen Inova (HZI), which converts organic waste into renewable natural gas and hydrogen. The City also started its own utility company, Lancaster Energy, allowing residents access to local renewable energy at lower prices.

"Lancaster's hydrogen journey is just beginning. Our partnerships, especially with Namie and the Japanese business community, demonstrate how a small city in the California desert can take control of its trajectory and turn that desert into a green energy asset," said Parris. "We remain steadfast in our commitment to hydrogen and look forward to a day when hydrogen is a common solution across the state of California, the United States, and the broader Pacific."