SHEFFIELD, England, Dec. 2, 2022 /PRNewswire/ -- Elise, a young amateur boxer boasts an illustrious junior and amateur career securing a multitude of European and National Championships. Her impressive rise through the 57kg weight division has recently been recognised by GB Boxing, awarding her a place on their podium squad. 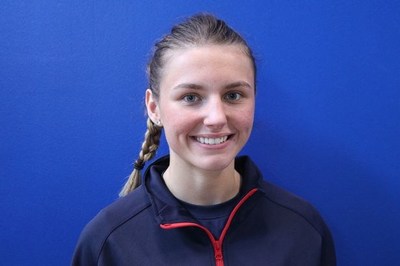 Starting boxing at the age of 13, Elise spotted a poster advertising a local boxing club and asked her Dad if she could give it a try. Elise's father Pete, is a major part of her story and when Elise found boxing, Pete did too. Pete learnt his craft gaining his coaching badges, and trained his daughter himself.

To help fund her passion Glynn holds down multiple jobs whilst training full-time, and studying for a degree with the Open University in Business Management and Marketing.  Fresh funding from Version 2 provides a much welcomed addition to her training camp.

The Partnership with Elise represents Version 2's third format partnership in sport after becoming the Official Partner of BOXXER, Savannah Marshall and Sky Sports Boxing in October 2021 and most recently Saracens Rugby Club in January 2022.

Version 2, a lighting rental specialist for the television, broadcast and event industries have supplied lighting to the likes of Strictly Come Dancing, The Jonathan Ross Show and are also active in the sports broadcast market supplying lighting to both the BBC and ITV for their studios at the FIFA World Cup in Qatar.

The future of women's boxing is bright, and shows no sign of slowing down. Over 2m sports fans tuned in to a historic night of women's boxing back in October when Savannah Marshall fought Claressa Shields at the 02 Arena creating the biggest TV audience for a live women's sports event ever on Sky.

The importance of Pete Glynn should never be forgotten in his daughter's story. Sadly, Pete a single parent is suffering with incurable bone cancer, but Elise cites her father as the reason she gets up in the morning, and boxing gives her father a purpose.

Olympic hopeful Elise Glynn, is delighted to be supported by Version 2.

"A massive thank you to Nick Edwards and Version 2 for their support going forward as my main sponsor. I'm immensely grateful to have Version 2 on board to take the financial pressure off myself, with the aim to qualify for the Paris 2024 Olympic Games"

"Version 2 also sponsor professional boxer Savannah Marshall who is my role model, so to get the support from the same company is amazing!"

Nick Edwards, Managing Director at Version 2 commented on the partnership.

"We're immensely proud to be supporting Elise and her Paris 2024 dream!

The future is bright for Elise, a serious talent and at just 21, we feel is only just getting started. We're excited to be supporting Elise on her journey."

About Version 2
Version 2 are trusted, independent suppliers of specialist lighting equipment rental and services to the Television, Broadcast and Event industries.
Home to an expansive, modern inventory, including the latest LED and low energy technologies, the company product range is reinforced by a highly experienced team providing expert technical support and project management plus creative innovation and in-house engineering services. Proudly partnering some of the world's leading Lighting Directors and Production Crews, both in the studio and on location, Version 2 are passionate, ambitious and committed to enhancing the customer experience by delivering excellence throughout all aspects of their business.